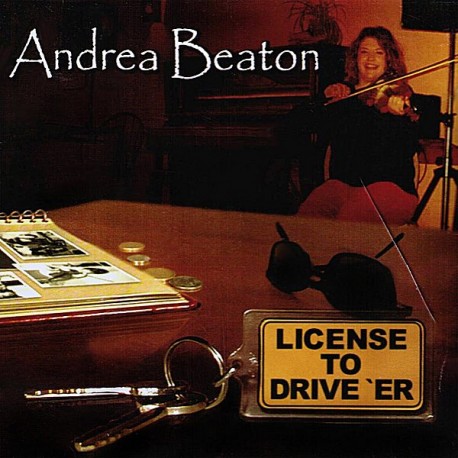 Buddy MacMaster's niece, Natalie MacMaster's cousin, it's a great musical lineage to be a part of. A spirited performer, she has lived up to her live performance reputation by making a dynamite debut recording.

This product is no longer in stock

Listen to music samples on CDBaby.com/cd/andreabeaton

Buddy MacMaster's niece ... Natalie MacMaster's cousin ... it's a great musical lineage to be a part of. And that's just the family that this young fiddler belongs to.

Andrea Beaton, the daughter of Kinnon and Betty Lou, has recently released her debut CD, cementing her as one of Cape Breton's brightest young stars. At 21 years of age, Andrea has been surrounded by traditional Cape Breton music from birth. She was given fiddle lessons as a child but never really got into the performing aspect -- until recently. After high school Andrea headed to Prince Edward Island to attend school and became good friends with the Chiassons (of the group Kindle). With their encouragement, she went into the studio and the product of this hard work is now available to fans around the world.

The collection of tunes on this CD are mostly from her family, including her father Kinnon (one of Cape Breton's most popular composers), and some of her own original pieces. Other composers include Kevin Chiasson (of Prince Edward Island's legendary Chiasson family), the late John Morris Rankin (of the Rankins, one of her early influences), Joey Beaton, Jerry Holland and Donald Angus Beaton. Cape Breton composers are more than happy to pass their tunes down to the next generation.

Musicians were also happy to accompany Andrea on her recording. On piano, there are Kevin Chiasson, Mac Morin and Betty Lou Beaton. Pat Gillis, Gordie Sampson and Brent Chiasson can be heard on guitar. Other musicians include Elmer Deagle (mandolin), Brent Chiasson (drums) and Kinnon Beaton (fiddle). Quite the impressive backup!

Andrea has a lively, playful sound to her fiddle style, with the Cape Breton influence very obvious. Hearing her on this recording is a treat, but hearing her live is even better! Two of my favourite tracks on this CD are the live cuts at the end of the recording. Both were recorded at the Red Shoe Pub in Mabou (which is becoming a popular recording spot). These two tracks are dedicated to Francis Beaton and the West Mabou Hall (the location of the West Mabou Dances ... some of the best dancing in the world). These are great tunes for dancing, especially the last set for a good, square dance. And she is accompanied by her father Kinnon on fiddle, mother Betty Lou on piano and Gordie Sampson on guitar.

Being a young fiddler, Andrea's youth shines through in the "Funky Cut" set, which includes some modern accompaniment sounds such as drums and bass. This set consists of a strathspey and five reels.

Andrea's already very well known in Cape Breton as the daughter of Kinnon and Betty Lou Beaton. But this album should bring her into her own spotlight.